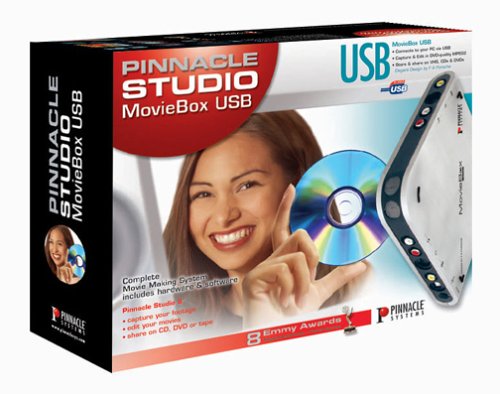 Product prices and availability are accurate as of the date/time indicated and are subject to change. Any price and availability information displayed on [relevant Amazon Site(s), as applicable] at the time of purchase will apply to the purchase of this product.

Pinnacle Systems’ Pinnacle Studio MovieBox captures and digitizes analog composite and S-video signals and delivers them through your PC’s USB 2.0 port. Bundled Studio 8 software helps you edit and assemble clips for recording onto videotape or for burning onto CD or DVD media.

To set up MovieBox, we connected the power and video source cables and followed the Windows New Hardware Wizard to install the driver software on our notebook computer. Next, we followed onscreen prompts to install Studio 8. The entire process was intuitive and took 16 minutes. Note that MovieBox USB has neither input nor output support for FireWire, so you will likely use a VCR instead of a digital camcorder as the primary input device.

Before testing MovieBox with Stuido 8, we tried to see if other editing programs would recognize the device. Neither Nero Vision nor Windows Movie Creator was able to initialize MovieBox, so expect to use it exclusively with Studio 8. Upon starting Studio 8, the program presented us with a simple but thorough 17-minute video explaining the basics of capturing, editing, and making a movie.

In our tests, we captured and edited over two hours of clips without a single error–not even one lost frame. Studio 8 intuitively handled positioning and trimming clips, adding transition effects between scenes, and creating DVD menus. The biggest drawback was the lack of multi-level undo–that is, you can undo only one previous mistake, which means correcting even minor errors can quickly become time-consuming and very irritating.

Rendering and compiling finished DVDs took between a few minutes and several hours depending on complexity. The final results were mixed. Some movies looked very good, with video quality about average for the cost of the device; others suffered from out-of-sync video and audio. Overall, MovieBox is a simple, intuitive solution for novice home moviemaking. Professionals and serious amateurs will lament its lack support for popular video editing software, its intermittent quality, and its single-level undo. –Mike Brown