Movie Speak: How to Talk Like You Belong on a Film Set 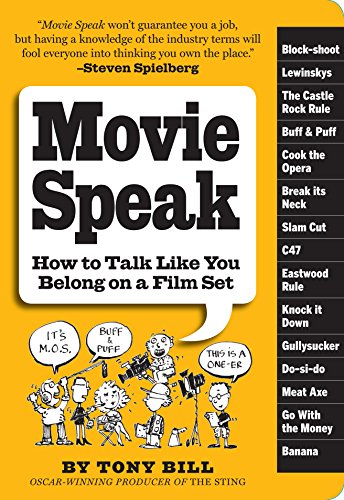 Product prices and availability are accurate as of the date/time indicated and are subject to change. Any price and availability information displayed on [relevant Amazon Site(s), as applicable] at the time of purchase will apply to the purchase of this product.

When is “groucho” not a comedian? A “seagull” not a bird? A “banana” not a fruit, and a “taco cart” not a food stand? What’s the “Castle rock rule” and when should you call for a “buff & puff”? And why expect trouble when the A.D. (assistant director) knowingly mumbles “Gone With the Wind in the morning, Dukes of Hazzard after lunch”? An oral tradition gathered and passed down for more than a hundred years, the language of moviemaking, like other secret lexicons, is the only accepted way of communicating on a set—and is all but unknown to the outside world. Technical, odd, colorful, mysterious, the working language of movies sheds light not only on the hugely complex process of making a film, but on the invisible hierarchies of a set, the unspoken etiquette between cast and crew, and the evolution of a process that’s endlessly fascinating.

Movie Speak is a book about language, but through language also a book about what it’s really like to be a director or a producer or an actor or a crew member. An Oscarwinning producer (The Sting), actor (who worked with Spielberg, Coppola, and Sydney Pollock), and director (Five Corners, Flyboys, My Bodyguard, and more), Tony Bill has been on sets for more than 30 years and brings a writer’s love of language to this collection of hundreds of film terms. A futz. A cowboy. A Brodkin and a double Brodkin (a.k.a. screamer). Streaks ’n tips, a Lewinsky, Green Acres, rhubarb, a peanut, a Gary Coleman, snot tape, twin buttes, manmaker (and why you can yell for one if needed for a grip, but must whisper if it’s for Tom Cruise)—these are the tricks of the trade.